Dear Bellingham, well here we are in the “phase 2″ effort to re-open our economy. What a year it’s been! We will continue to exercise reasonable caution in an effort to minimize future transmission and potential spread of our new guest that may not go away for some time, the SARS-Covid 2 virus. Please observe and respect our restrictions and business policy regarding this still existing pandemic. We are open Thur.-Sat. 10-6 for drop off and pick up repairs, refurbished bike sales, and some over the counter parts sales. Our self-repair community tool share benches will not be available until further notice. Please bring a mask with you in case of close contact interactions with staff and pretty please be patient as our staffing is very limited and there is always so much to do and consider.

We are still accepting parts donations with these exceptions: no clothing or shoes, no worn out tires or 29er’ tires (we have way too many and we’re waiting for a 29er’ revival?), no tubeless tires with mayonnaise or whatever goo is in them. We will consider some 24” wheeled bikes or larger (adult sized) bikes, we may not be able to take everything you have as space is very limited in our shop.

We have started a new facebook group called “Free Wheels for the Children” in an attempt to connect families with kids bikes to give with families in need of kids bikes. This is strictly a sharing resource, $free-ninety-free, so no selling of bikes please (trading kombucha scobies o.k.).

We will continue to update this message month to month to keep our community in the loop regarding the details of our operations.  As always please feel free to give a call and leave us a message 360-255-2072 or reach out via e-mail, thepedalproject@gmail.com.

Thanks so much for all the support! Lots of love to our sweet community.  -The Hub 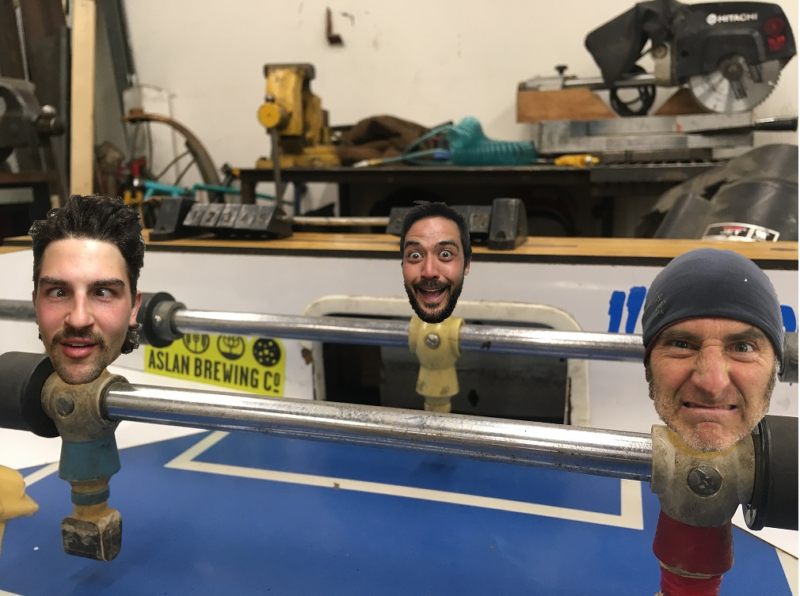 Its no secret that Kyle, Dennis, and Alex like to chat.
Always chattin’ it up, about all sorts of things and stuff.
We may have mentioned to a few of you we’d be having a “bike sale” on 4/20.
Well, we decided we’d like to make this a little more of a special day,
and we need some more time to plan it all out.
So it can be awesome, for you!
Saturday the 20th will be business as usual,
and keep an eye out for our Summer Sale!

Also, officially calling all local businesses to donate a sticker or two for advertising on our bathroom door, and foosball table, or both!

Join the folks from Aslan Monday 4/22 for a cycle-powered creek clean up! Meet at the Hub, 4PM. Click the link above for more info!

We’re changing things up a little bit, and are opening our door a couple hours earlier than before. 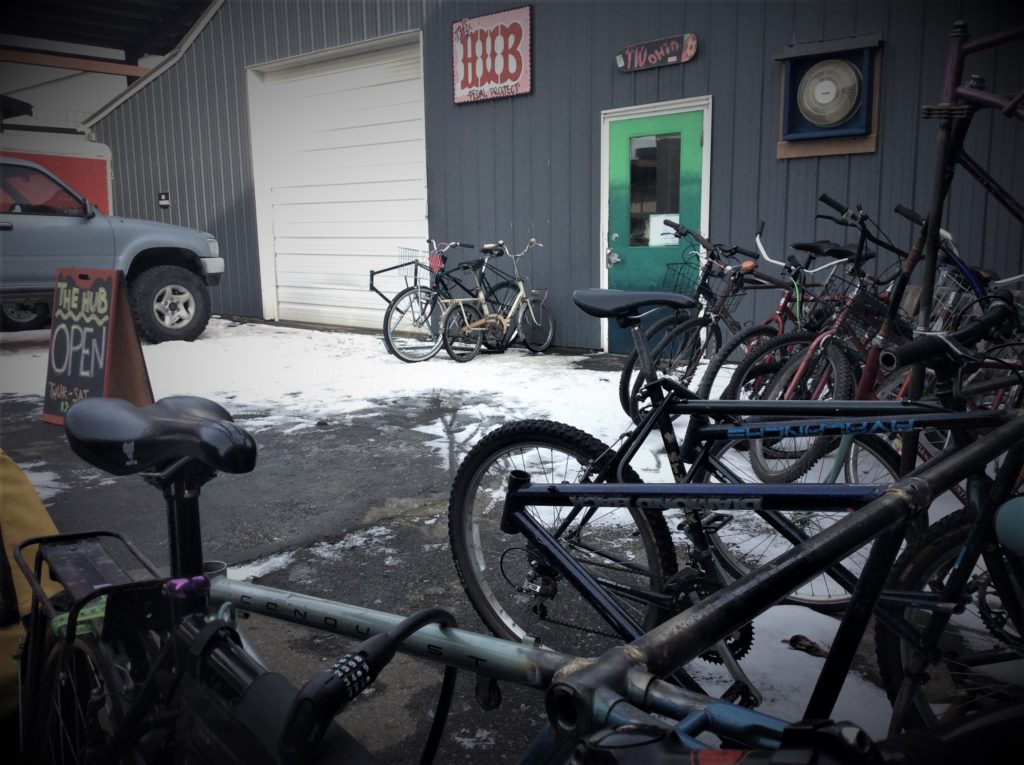 we’ve aided our parking situation with the addition of some custom-made brass brazed racks, constructed from recycled bike frames.

Come on down to the LAST pancake hurrah on the South Bay Trail!

The 2018 bike to work and school day Pancake Feed!

Hello Hub fans, check out this information below posted by WMBC. They have some cool ideas to make our city even better.

Pump Tracks in our city Parks:

Bellingham residents, we need your help!

As many of you know, we’ve been working with Bellingham City Parks for a couple of years proposing that the WMBC build pumptracks in our parks. I’ve suggested and toured many sites with our Parks Director, Parks staff and even a couple of our city council members – who are all very supportive. After many visits, we narrowed the first location to an almost never-used grass field in Whatcom Falls Park that is near the playground, basketball courts, parking lot and a future bathroom.

Last Wednesday morning, Eric presented our Whatcom Falls Pumptrack proposal to the City Parks Advisory Board to ask for their recommendation to amend the Park Master Plan. Ultimately City Council will vote on that, but we are asking the Advisory board for a recommendation. You can see that presentation here: https://kevinmenard.files.wordpress.com/…/wmbc_wf_presentat…

Based on the amount work that’s gone into vetting the site and an all-star team to build it (at zero cost to the city), it felt like a slam dunk. The vote was tabled ’til next month’s meeting after a couple of the Board members didn’t agree with Whatcom Falls as a good location. In fact, this is a perfect location because it is surrounded by neighborhoods (rideable for kids to the pumptrack), we have 4 kids bike clubs near it, it’s near other facilities and has good shade which helps with maintenance While pump tracks might be considered an “emerging” activity locally, there are already hundreds built around the country in public parks (Santa Cruz has 7 of them).

Long story short, if you’d like to give our kids easier access to ride their bikes and get them off X Box / Social Media, would you be so kind as to write in support these types of opportunities in our parks? While Whatcom Falls would be the first location, we’re already looking at future locations with Parks Staff for various neighborhoods. As always, keep your letter positive in tone and express why you feel these will benefit our various neighborhoods. A well-crafted and civil letter goes a long way.

Please send your letter to the Parks Board and be sure to include our Parks Director and City Council: parksboard@cob.org ; cc@cob.org ; lbryson@cob.org

But if you do, this stuff looks like it could help it not suck. Generally speaking we don’t condone repainting bikes because often the original paint even in rough condition will look better then any rattle-can job.

Restore, renew, or just get plain funky with Spray.Bike – A rattle can just for bikes!

Pinhead Locks has come out with some nifty ways to keep your components yours. If you find yourself replacing seat posts and wheels more then you want to check out their link below.

Check out this interesting article by wabikes.org and learn what it means for Bellingham to ranked silver in bicycle friendliness.

Are you bicycle friendly? Check here!

Click the link below to register your Fred Meyer Rewards Card to The Hub Bike Shop. Fred Meyer will give a percentage of your Grocery Bill back to The Hub to further our programs. Its a win win win! Thanks for your support.

Courtesy to The Bellingham Herald

Question: Welcome to the bicycle question roundup. Questions about bicycles have been pouring in, and I’m going to try to tackle them a couple at a time, so this is part one. I don’t usually edit the questions much, but some of these had a strong bias, either pro-bike or anti-bike. I’ve tried to cut the bias and keep the question. Whatever your perspective, I hope these answers help to create harmony among cars, bikes and pedestrians. Please use this knowledge for good, not evil. Now, let’s get started.

1. Are bicyclists required to carry license, registration and proof of insurance just like a car since they are to follow the “rules of the road”?

The simple answer is, no, they don’t. I’d be curious to see what kind of response you’d get if you tried register your bicycle at the auditor’s office or went to Department of Licensing to apply for a bicycle license, since those are not even options. The mandatory insurance law in Washington applies to registered vehicles (and even then has a few exceptions, including motorcycles), so bicycles are exempt from insurance requirements. While not very common, bicycle liability insurance is available and may be a good option for some cyclists. If you think bicycle insurance sounds odd, consider that much stranger insurance policies have been issued, including a cricket player who insured his moustache.

2. Is there a helmet law for cyclists?

Washington does not have a helmet law for cyclists, but cities and counties can establish their own local helmet laws. None of the cities in Whatcom and Skagit counties have helmet laws, but in the event that you go an a cycling trip, the Department of Transportation has a list of places where helmets are required.

Even though we don’t have a statewide bicycle helmet law, more and more cyclists wear them by choice. When I was a kid riding around the neighborhood with my friends, none of us wore helmets, except one kid that had a brain injury, caused by not wearing a helmet. I guess I didn’t get the irony of that at age 10.

3. Are there any rules around required lights on bikes — size, location, intensity, etc. — like there are for motorcycles, cars, trucks and buses?

Before we get to the rules, I want to remind cyclists that if you ride without lights or reflectors at night, you’re nearly invisible to drivers and you will lose any confrontation you have with a car.

4. I see lots of cyclists texting while riding. Is that legal?

It’s legal, but it’s dumb. Washington’s texting law applies specifically to motor vehicles, so a cyclist couldn’t be cited for texting while riding. However, that doesn’t relieve cyclists from their duty to ride responsibly, and a big part of responsible riding is paying attention.

5. I have never seen a cyclist stopped by the police. Do the police police cyclists?

That’s it for today, but there are still more bike questions so stay tuned for bicycle roundup part two.

Friends of the HUB